The Autumn Leaf Autocross: A History 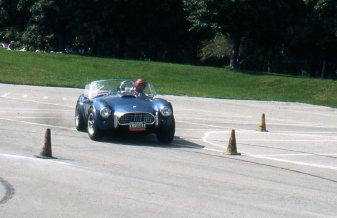 In the spring of 1979, club member Joe Rodman was approached by members of the local AC Cobra and Shelby Club with the idea of hosting a joint autocross with the Western Pennsylvania Shelby America Club. Joe said yes! The goal was to get other Shelby members to bring out their GT-350's and AC Cobra's to compete like Joe did at every event with his dark British Racing Green AC Cobra. There was a big shakeout of event insurance at that time, Lloyds of London was leaving the motorsports market and K&K had yet to take over the majority of those policies,  so the Shelby Club provided the insurance while North Hills ran the event at our lot at North Park. 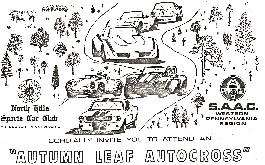 Joe and other North Hills members solicited local businesses for door prizes to award to class winners. Special trophies were created to be presented at the event. The event was called The Shelby Autocross and later the Autumn Leaf Autocross, appropriate as in most years the leaves in North Park in autumn are spectacular. 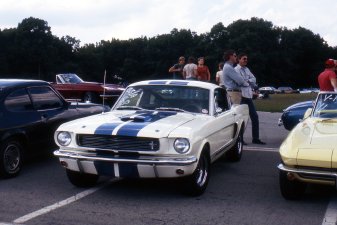 Judy Schwalenstocker and her mother made five gallons of Shelby's Teralingua Chilli for the after event party, which was served with chips, pretzels and of course copious amounts of adult beverages.  The event was a roaring success. Joe declared the chili terrible, but we still ran out of food, so go figure.

I have attached photos of Joe in his AC Cobra and a GT-350 Mustang that competed in one of the early events. I have also included samples of the promotional ads we published in our club monthly newsletter for the event.

In subsequent years the event included door prizes for everyone as well as an on site bar-b-que of monumental proportions and of course more beer.  (Yes...we were a drinking club with an autocross problem. )

By 1989, we realized that participation by the Shelby club had all but disappeared and door prizes were hard to come by. So, Joe called on his friend Fran Kress (who just happened to run a t-shirt printing company ) to create a t-shirt that would be given to each Autumn Leaf Ten entrant. That shirt was a yellow short sleeve Tee featuring a large maple leaf in the center of the chest, an AC Cobra at full chat erupting from the leaf. I have attached a photo of that Autumn Leaf X t-shirt.  An Autumn Leaf t-shirt became the signature of the Autumn Leaf event, as did the bountiful after event party 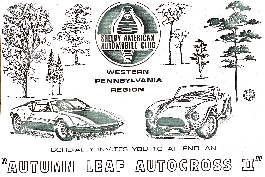 In early 1990, the club was presented with an interesting opportunity by The Roadster Factory, a British sports car parts house in Armaugh Pa.  TRF was planning a summer party for their many customers and wanted to host an autocross as one of many car related activities. Would North Hills Sports Car Club run the event for them? Club member Keith Srakocic negotiated with TRF that in lieu of a cash payment, they could compensate the club with T-shirts for our Autumn Leaf event.  A win/win for both parties. 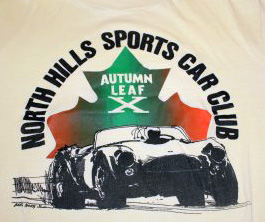 For the next seventeen Autumn Leaf events, (1990- 2007) the shirt was graced by a different British sports car. All of these designs were created by Rob Brownlee, the lead artist in the TRF Art Department. The last TRF Summer Party occurred in 2007, so for 2008 the club contracted with Rob and his son Eric to create our Autumn Leaf shirts on an independent basis.  That continued thru the 2015 event when Rob left the area.

The shirt for the 2016 event to the present day have been created by Phil, the lead artist at Greater Pittsburgh Specialty Advertising in Millvale, Pa.

As of this writing, the club has celebrated forty one Autumn Leaf Autocross events with only minor changes from the original format. In that time we have presented thirty one different T-shirts to our competitors.  The club maintains an archive of every Autumn Leaf shirt in hopes of one day being able to mount them in frames for display.  We look forward to hosting the Autumn Leaf Autocross for many years to come.